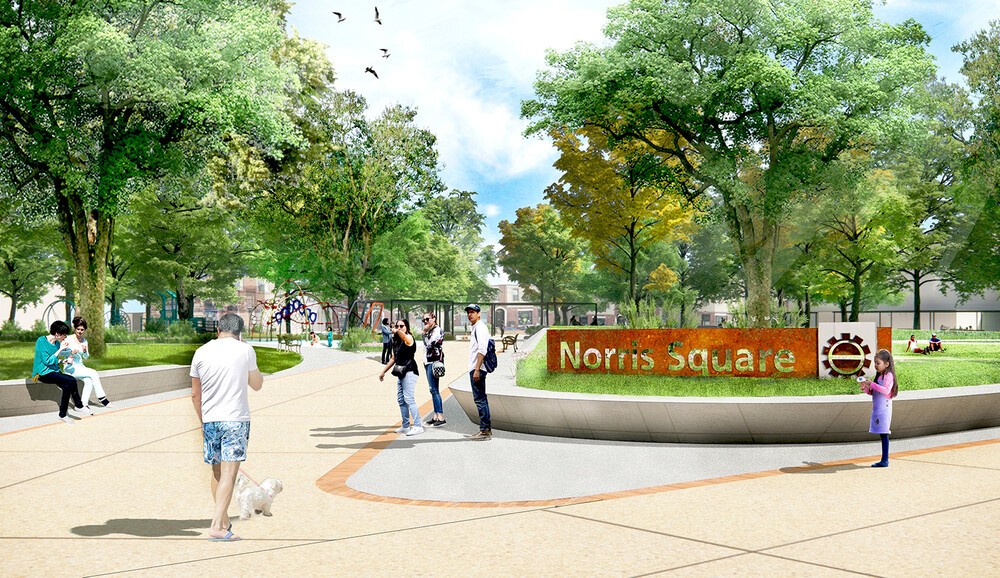 Norris Square Park, located in North Philadelphia, builds upon the city’s rich history of public parks. While not part of William Penn’s original five squares, Norris Square Park’s design was based on nearby Franklin Square.

Norris Square Park from an aerial view, seen throughout the years.

Marvel was brought on by Philadelphia Parks & Recreations, in coordination with the Office of Councilwoman Maria D. Quiñones Sánchez, to improve specific segments of the park, such as the playground and basketball court, while developing a vision plan for future development and improvement. When approaching a multipurpose project like Norris Square Park, the first thing Marvel Partner Yadiel Rivera-Díaz did was engage with the community. “We started with understanding how the space is being used today and got input from the neighbors on what improvements to prioritize and what will make the park better,” he notes. “We’re setting up a vision that they can take with them and use as the framework for the future development of the park." From historical research to site investigations, having a broad base of knowledge allows the team to understand each location’s specific needs.

Using feedback received through community forums and surveys, insights were parsed. Public comments emphasized the need for improvement and consolidation of the playground areas, the need for a central, flexible, multi-generational gathering space, and the need for additional seating areas, trash cans, and improved lighting. When consulted on the new playgrounds, residents noted that the old playground should be kept available during construction, so as to not take away a vital space for children to play. These early comments help guide the project planning, as final design and scheduling efforts can be made to limit disruption and maximize future usability.

Rendering of central amphitheater and pergola.

In addition to qualitative data, entrance maps were created to analyze traffic patterns and density from different community groups. “We wanted to highlight entry portals, which are directly used by the community.” Residents of the Norris Square Senior Center frequently used the east/west corridor, while the northeast portal was most convenient for passengers exiting the nearby York-Dauphin station. The Vision Plan offers secondary pathways and a new amphitheater. 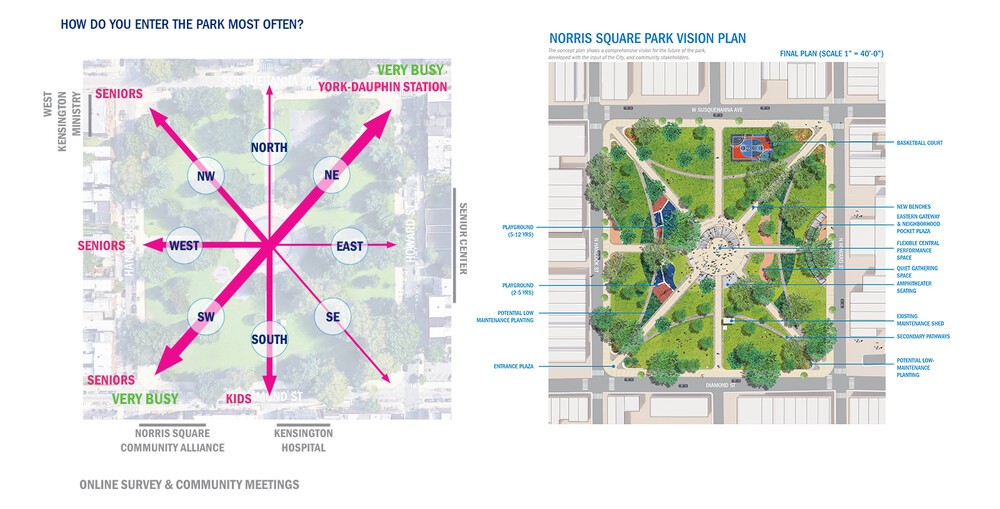 With new surfaces and structures to design, the team at Marvel again looked to the community for insight. “The surrounding neighborhood has a strong Latino and Puero Rican community, so we took inspiration from what the neighborhood has done.” Little accents currently dot Norris Square Park—a cultural mosaic featuring Taíno symbols, an elm tree painted with a Puerto Rican flag—details that have been adapted for color palettes within the playground and a bold design for the new basketball court. 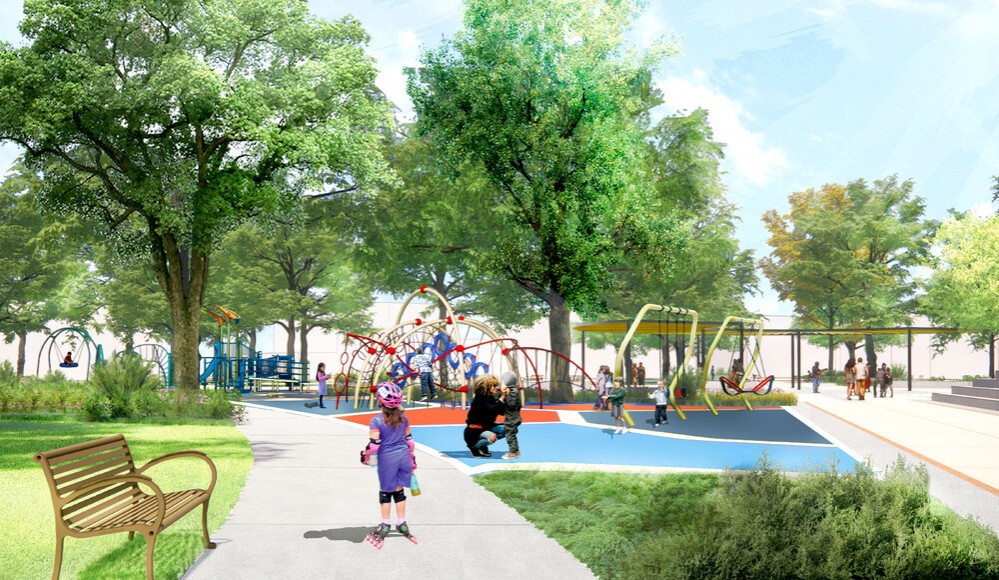 Rendering of future playground and walkways.

Over the past few decades, Norris Square Park has made a stunning turnaround. “The community brought it up from neglect, the neighbors organized and slowly have been able to make Norris Square Park a park that everyone enjoys and uses.” Continuing the park’s upward trend is a priority for Yadiel, and the rest of the team. With construction aiming to begin in 2022, an enhanced Norris Square Park will begin taking shape, with the goal of better serving the needs of this beloved North Philadelphia community. 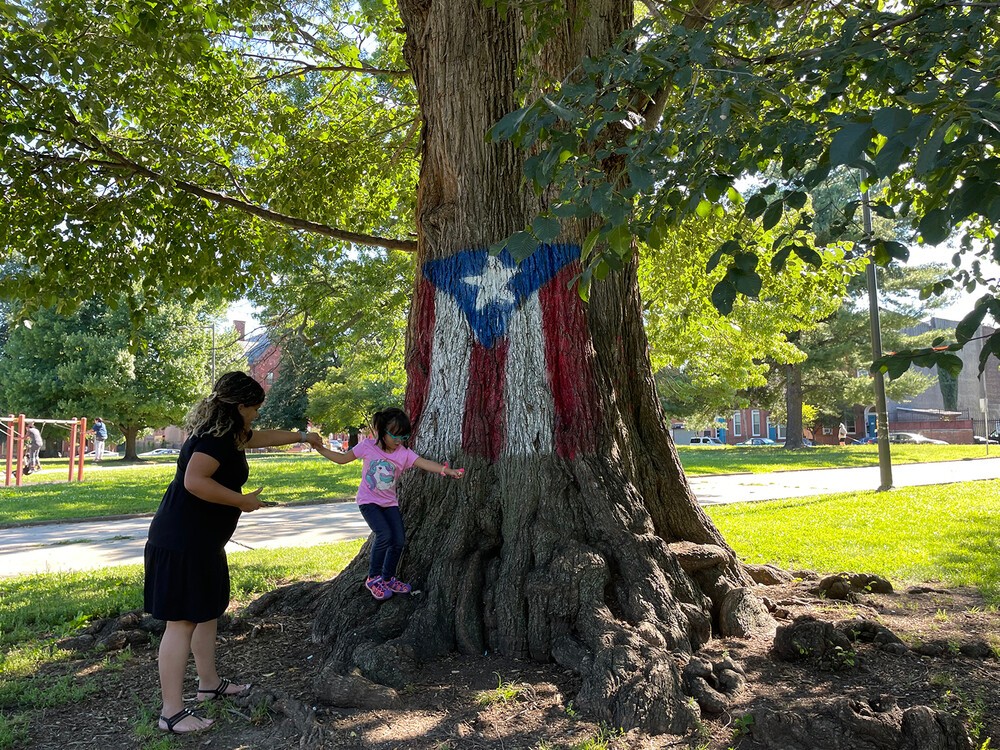