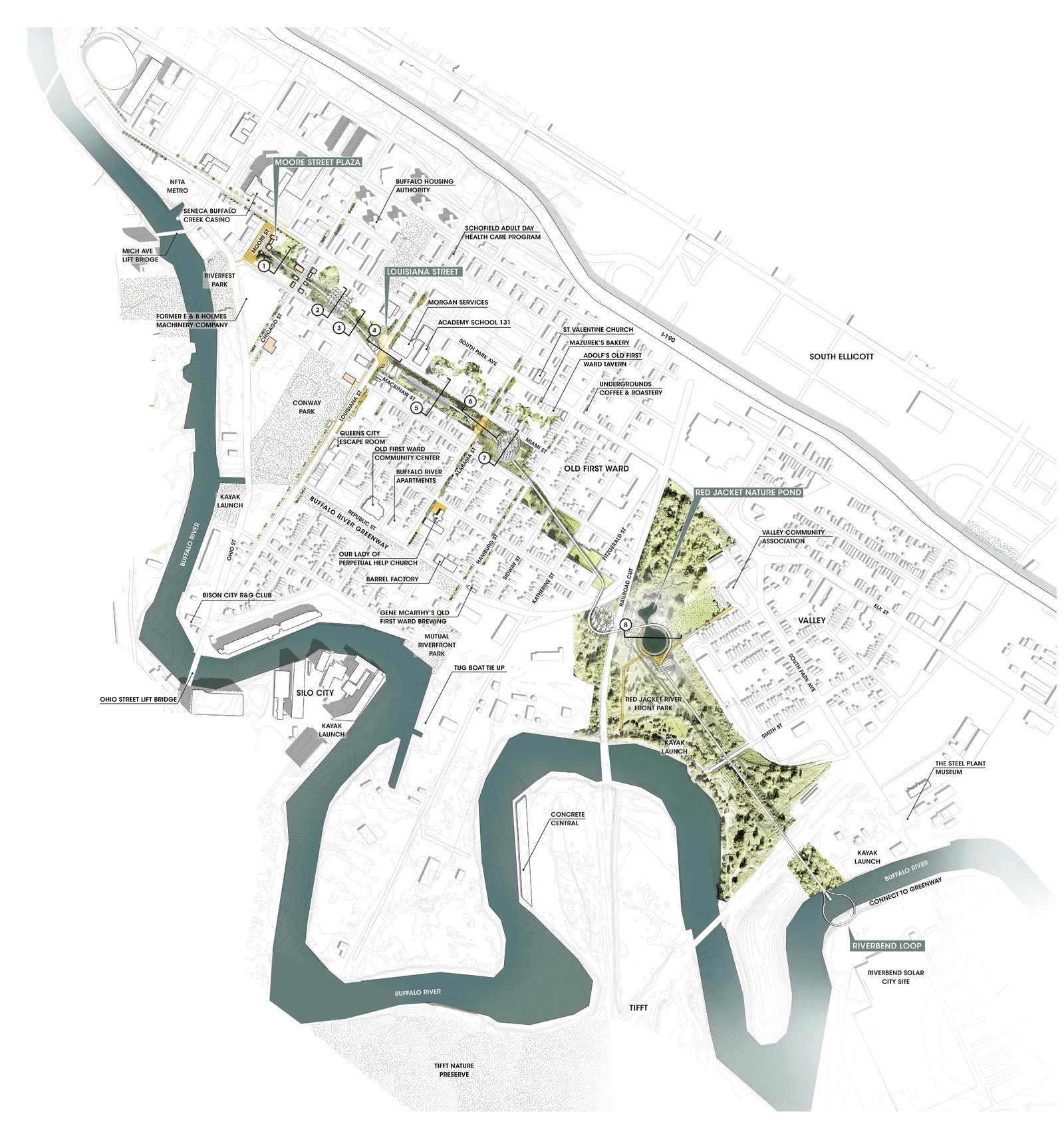 Two paths travel along the Corridor that weave along the former rail line as circulatory streams. In this way, the DLW aims to create a dynamic experience that is both pastoral and social, and encourages moments of respite, anticipation, gathering, and celebration. The paths follow the general topography that remains from the rail line berms and utilize its width to promote gathering moments that are screened from neighbors and connections at grade with the three primary cross streets; Louisiana, Alabama, and Hamburg. Access points to the trail are critical links to the neighborhood where people are encouraged to spur off the path to explore cultural and recreational destinations in Old First Ward and beyond. At the core of our proposal is an urge to preserve memory and create new spaces for exploration. The industrial nature of Buffalo is inseparable from its character and the DLW is a space to rediscover this heritage and reconnect future generations with this indelible landscape.

Diagrams
The Dell, The Link & The Wander (DLW) is an opportunity for local residents to connect with nature and explore public spaces in dynamic new ways. The DLW will be a conveyor, providing a path from downtown to the Buffalo River. But the LINKS, the spaces where the path intersects with the streets, will be the point of arrival and departure for the immediate neighborhood and thus critical to the success of the DLW. The links will provide vibrancy on the street and that activation will be leveraged to inspire ownership and equity within the public realm. 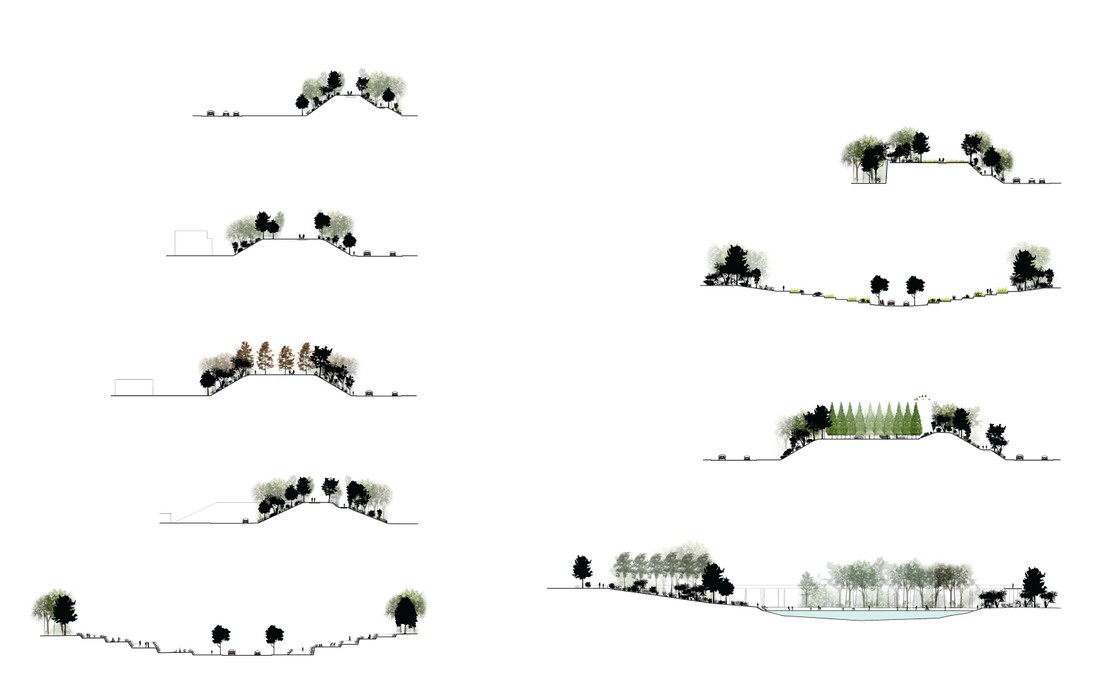 Sections
The DLW creates a new connection for the City of Buffalo by stitching together the downtown to a meandering portion of the Buffalo River. This connection will encourage residents to explore their neighborhood in deeper ways and connect with the landscape that makes up the environment in which they live. 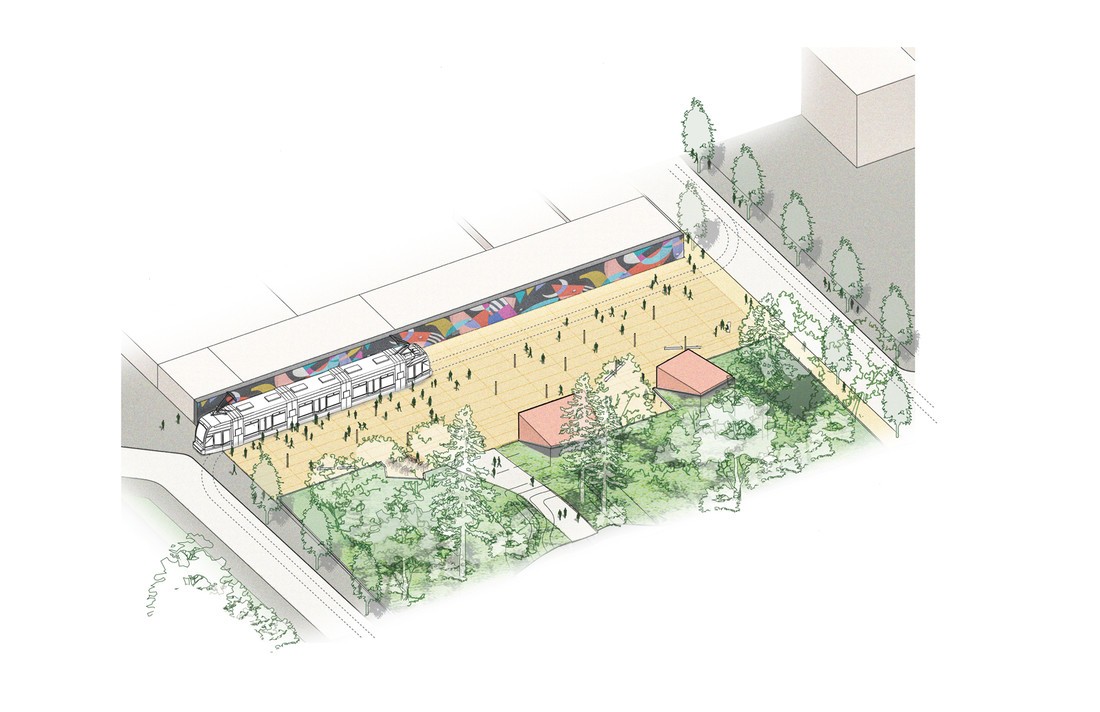 Moore Street Plaza
Given the potential connection of the NFTA Light Rail Main Line Extension and its direct connection to Downtown Buffalo, the DLW proposes to terminate at Moore Street Plaza which will be shared with the light rail. As a terminal light rail station, the plaza will be activated with people arriving and departing the DLW and the plaza will have permanent kiosk operations, a public restroom, pumping room, and space for public programming and farmer’s markets. The Moore Street Plaza will be the vibrant and equitable public space that announces to the visitor that they have arrived. 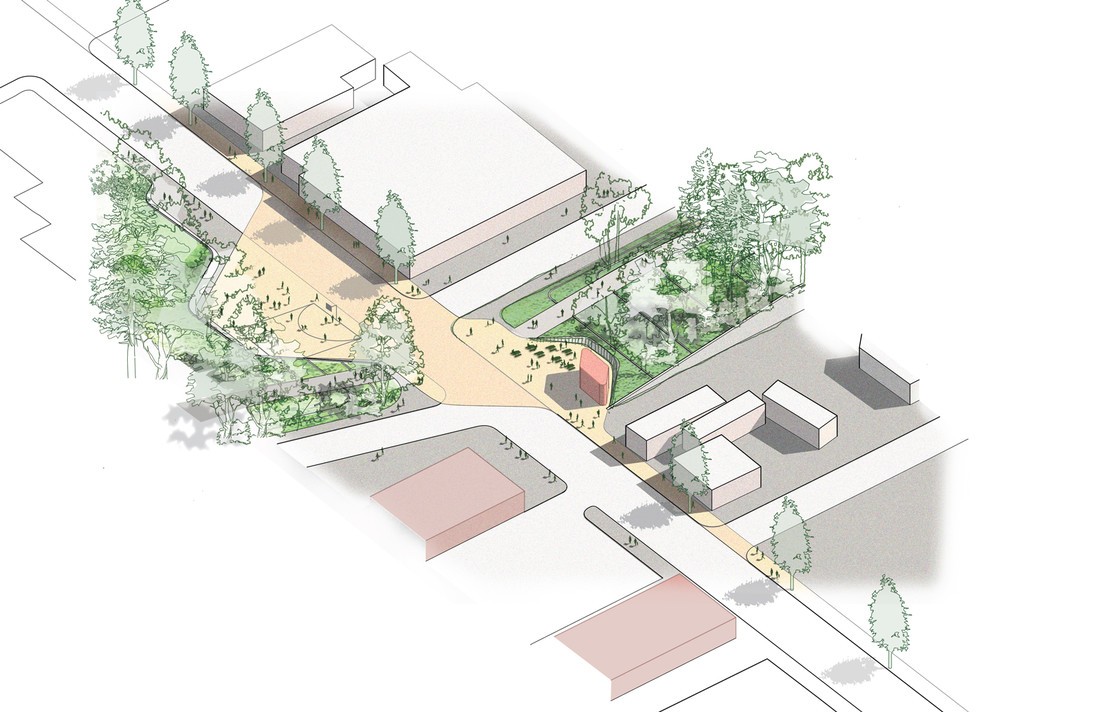 Louisiana Street
Louisiana Street is the strongest north/south connection in Old First Ward threading the connection from the Ellicot Neighborhood to the north and Silo City and the Buffalo River to the south. Here the DLW carves into the berm to create opportunities for active recreation on Louisiana Street, building on the character of active recreation on this corridor with Conway Park and the Ohio Street Kayak Launch. This link creates neighborhood amenities such as basketball courts, public restrooms, picnic/BBQ areas, and space for performances and movie screenings. 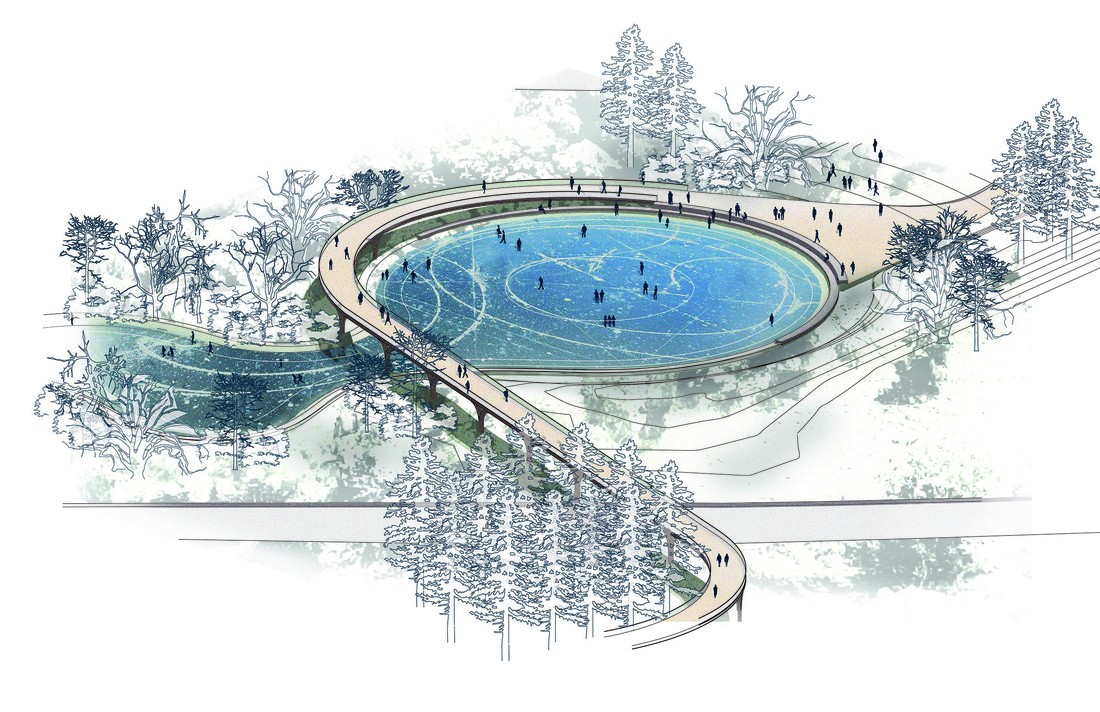 Red Jacket Nature Pond
Red Jacket Riverfront Natural Habitat Park is a special place to those who know of its nature trails, kayak launch, wildlife habitats, and seclusion. Here the DLW would move through it in a single swoop connected by straight lines so as not to deter from the existing park path system. The single swoop would encompass an extension of the existing water course where the native plant life and wildlife habitat can flourish. The DLW path on Smith Street would open up to an accessible deck where access to the water would be possible and encourage winter activity to occur. 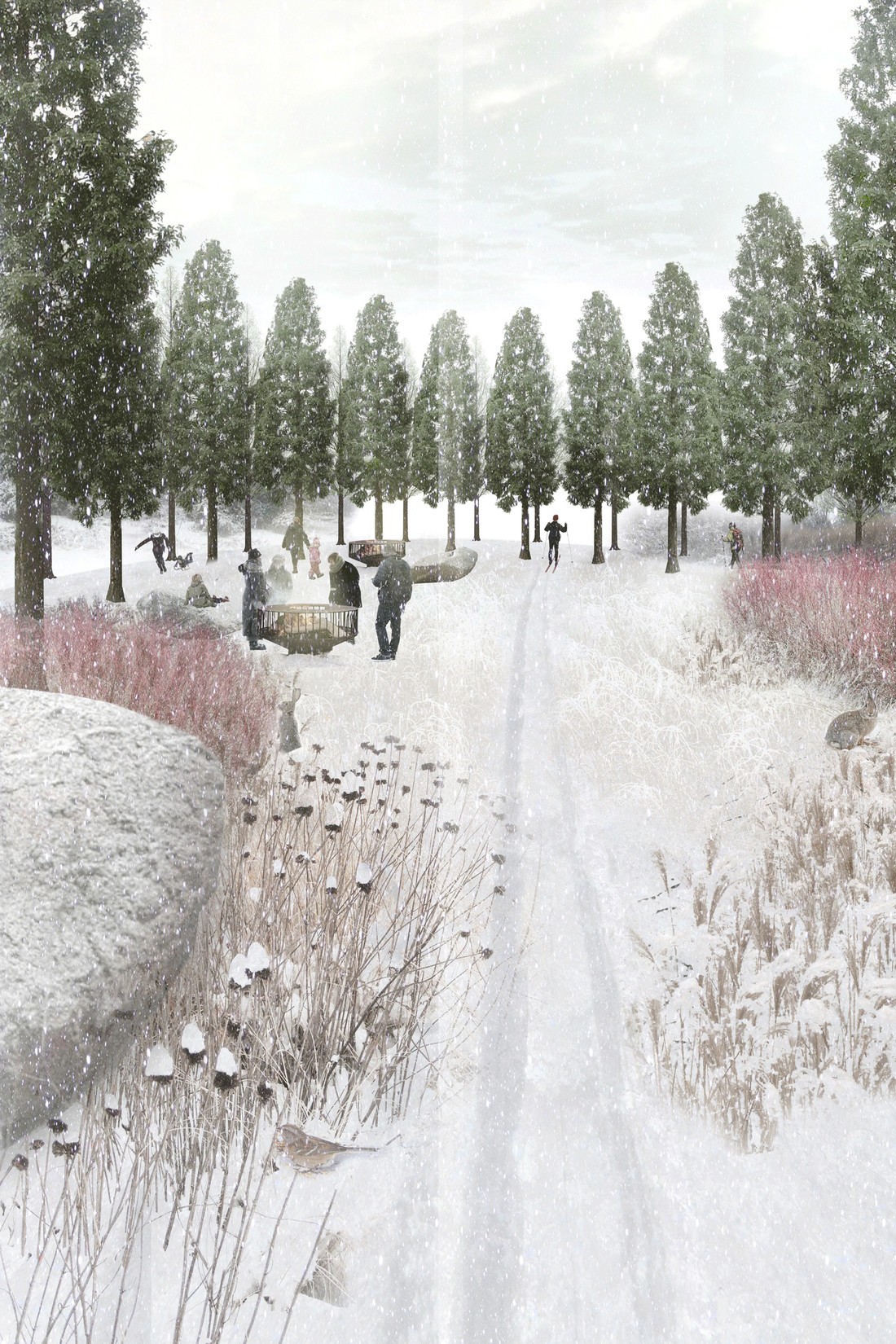 Circle Garden
The DLW is a space for inspiration and respite, where new generations of residents in the Queen City will want spaces to discover and evolve as the city around them does. A wildlife corridor as much as an urban trail, the dells will punctuate the DLW with verdant green spaces. 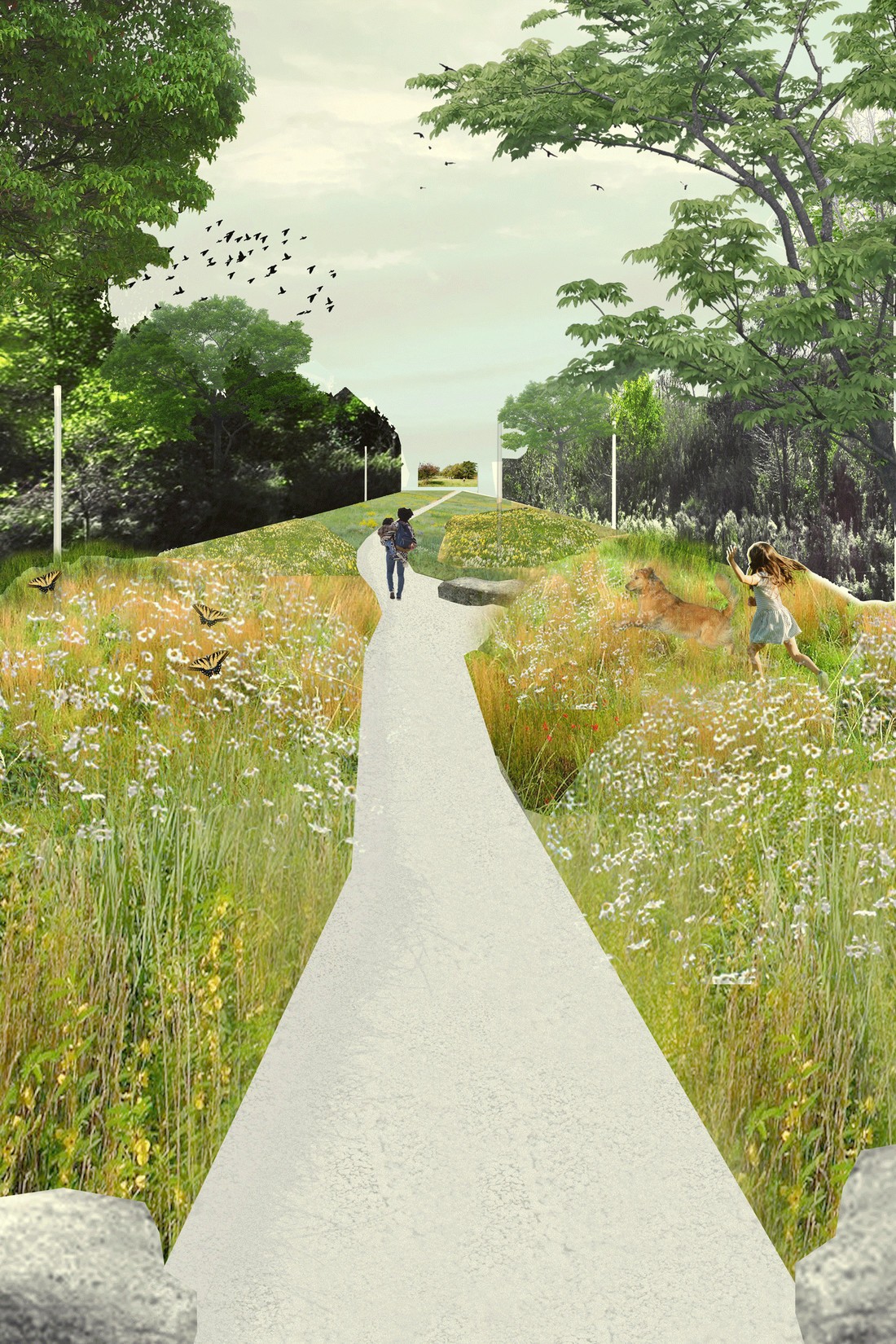 Patchscape Garden
Wanderers are encouraged to visit the DLW and to let the paths guide them through environments bolstered with native and wild vegetation, and to let their minds wander along the former rail line and all of the impact it has had on the shaping of Buffalo.